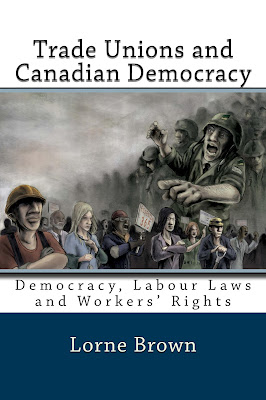 This overview of the relationship of organized labour to the political economy results from a case heard before Mr. Justice Dennis Ball of the Court of Queen’s Bench in 2011.  The Saskatchewan Federation of Labour (SFL) and intervener unions challenged the constitutionality of the Public Service Essential Services Act (PSESA) known as Bill 5 and an Act to Amend the Trade Union Act (Bill 6) passed by the Wall government in 2008.  It was argued that both Acts violated the Charter of Rights and Freedoms by interfering  with the right to strike.

I was retained by the SFL as an “expert witness” because of my experience as a labour historian.  This essay constitutes my submission to the Court.  The submission was unchallenged by lawyers for the Wall Government and the employers who defended the legislation.

On February 6, 2012 Justice Ball ruled that the Public Service Essential Services Act (Bill 5) was unconstitutional in that it “infringes upon the freedom of association of employees protected by s. 2 (d) of the Charter of Rights and Freedoms”.  He found amendments to the Trade Union Act (Bill 6) to be constitutional.  While Justice Ball found the PSESA to be unconstitutional he suspended his ruling for twelve months with direction to the provincial government to make amendments to the legislation.

The overview provided in this submission tends to be somewhat limited in scope because of the exigencies of what was required for the case before the Court.  However,  I think the essay provides a useful introduction to the important role trade unions have played in defending the interests of not only their own members but of all working people and Canada in general.  Indeed trade unions have played a major role in building and defending both political democracy and social and economic security.  Medicare, Public education, universal suffrage, public pensions, statutory and annual paid holidays, hours of work, health and safety regulations, minimum wages, employment insurance, pay equity legislation are a short list of the many benefits Canadians enjoy thanks to more than a century of trade union struggle.

Trade unions, the welfare state and indeed democracy itself are now under constant attack.  We must be ever mindful that an attack on trade unions is an attack on democracy.

Lorne Brown is Professor Emeritus at the University of Regina, Saskatchewan, Canada. His research specialties include labour history and civil liberties.


PURCHASE BOOK FROM DISTRIBUTORS BELOW

When Freedom was Lost: The Unemployed, the Agitator, and the State

Backbreaking work for slave wages in labour camps - that was the government's response to thousands of young men looking for jobs in the Dirty Thirties.

This historical account tells the little-known story of the jobless who drifted across the country during the Depression.

Lorne Brown seeks to remedy the dearth of the 30s labour Canadiana with this study of little-known labour camps. - Books in Canada 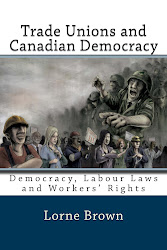 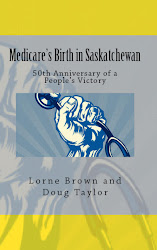 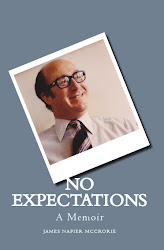 No Expectations: A Memoir. Click below for direct purchase from CraeteSpace.

Medicare's Birth in Saskatchewan: Direct purchase from CreateSpace below.